Amazon is investing $250 million to build a pair of massive operations facilities in the Hampton Roads, Virginia, area including a new robot-powered fulfillment center that, at 3.8 million square feet, would stand as the largest industrial building in the state.

At Old Dominion University’s Virginia Modeling, Analysis and Simulation Center in Suffolk, Gov. Ralph Northam announced Tuesday the Seattle-based retail giant had selected sites in Suffolk and Chesapeake for the two centers that are slated to open in 2021 and bring 1,500 new jobs to the region.

“With an existing workforce of more than 10,000 full-time employees across our Commonwealth, Amazon’s economic impact in Virginia cannot be overstated,” Northam said in a statement.

Amazon has grown rapidly in Virginia since opening its first operations facility in Sterling in 2006. The company has invested more than $34 billion in the state to launch 10 fulfillment and sorting centers, three Prime Now hubs and delivery stations in Ashland, Chesapeake, Chester, Clear Brook, Petersburg, Richmond, Springfield and Sterling. And its employment numbers are projected to more than triple as Amazon rolls out its second headquarters in Northern Virginia over the next decade.

Courtney Norman, a representative for Amazon, said in an email to CoStar News that consumer demand and a central location is driving the company’s expansion in the area.

Amazon plans to build the two facilities instead of leasing an existing complex like it did last month in suburban Richmond, when it signed a deal to fill one of the largest vacant warehouse complexes on the East Coast. Part of the reason for that, CoStar Hampton Roads Market Analyst Emiliano Morales said, could simply be lack of inventory.

“There is a shortage of existing, large, industrial space near the Port of Virginia,” Morales said.

Though the Hampton Roads industrial market is tight at less than 3% vacancy, the market has been mired by a lack of new construction since the Great Recession, Morales said. There is 810,000 square feet of industrial space under construction in the Hampton Roads market, with most of it earmarked as build-to-suits. Instead of ground-up developments, owners are renovating existing buildings to attract large-scale tenants. But Amazon has the potential to completely change the dynamics of the region.

“Not only is Amazon bringing more advanced industrial inventory to Hampton Roads, but it will likely attract and retain a larger talent pool” along with other corporate denizens such as payroll processing giant ADP and retailer Dollar Tree, Morales said. “I expect this to go similar to the entry of Amazon in Winchester, Virginia, where two more large employers expanded. Where Amazon goes, growth follows.” 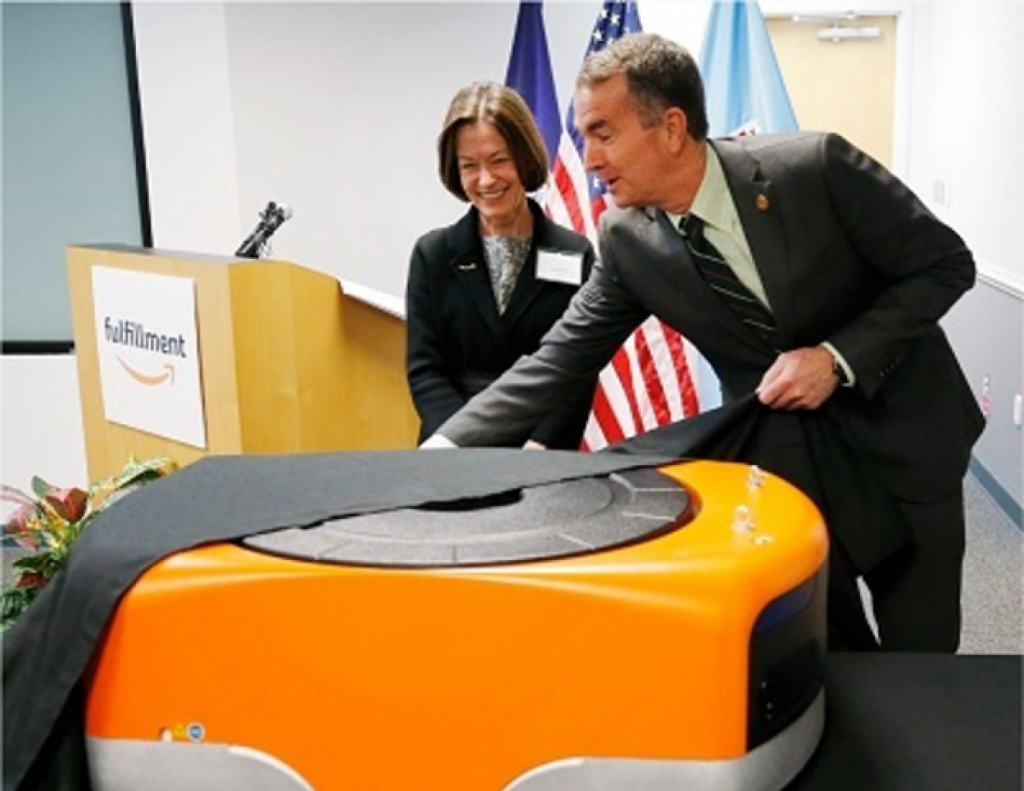 In Suffolk, the company plans to build a $200 million robotics fulfillment center in the Northgate Commerce Park that would mark the first of its kind for Amazon in the state.

Of the roughly 175 fulfillment centers Amazon runs worldwide, more than 25 of them utilize robotics including “drive units” that allow the company to store more inventory and expedite delivery. The units, which weigh about 320 pounds and can lift up to 1,500 pounds, work alongside Amazon employees to transport heavy items around the facility, which in Suffolk is expected to span approximately 11 football fields. “It’s not humans vs. robots, it’s humans + robots,” Amazon says on its website.

Amazon’s Norman said the Suffolk facility would house millions of products, thousands of product storage pods and hundreds of robotic drives. Roughly 1,000 employees could work at the Suffolk complex alone.

The project also continues a trend of Amazon building vertically, as it works to squeeze more automation into its facilities in an era of same-day and next-day delivery. The Suffolk complex is expected to be multiple stories and stand 90 feet tall, on par with a nine-story office building. Amazon is also planning vertical warehouse in other U.S. cities including Newport, Delaware; the Austin, Texas, area; as well as Memphis and Nashville, Tennessee.

Just a few miles away in Chesapeake, Amazon has also lined up a 75-acre site where the company plans to invest $50 million to a build a new processing center. That facility is projected to measure 650,000 square feet and would house the remaining 500 employees.

Amazon is eligible to receive benefits from the Port of Virginia Economic and Infrastructure Development Zone Grant Program. The Virginia Jobs Investment Program is expected to provide additional funding and services to support the company’s employee training activities.